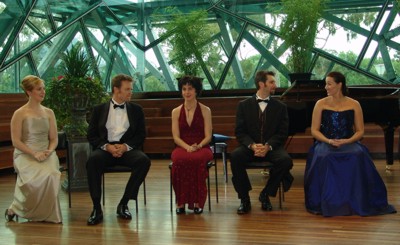 1st prize: Emma Pearson won a 1 year employment contract at the Wiesbaden Opera House in Germany, plus Austrian Airline ticket, 2 month German language course at the Goethe Institutin Germany and 1 month work experience at the Opera House to gain an insight into the procedures prior to the official start.

2nd prize: Angela Brewer won $2000 + an opportunity to perform in a widely published event in Melbourne.

3rd prize: Kate Handsaker won $1000 + an opportunity to perform in a widely published event in Melbourne.

4th prize: Rohan Thatcher won $ 500 + an opportunity to perform in a widely published event in Melbourne.


The Semi-Finalists
of the 2005 German-Australian Opera Grant


Semi-Finals will be held on 26 November 2004 at Melba Hall, Melbourne University.
For time schedule and registration contact: henkell@henkell.com.au.
Finals Concert on the 27 November 2004, 3.00pm at BMW Edge, Federation Square.