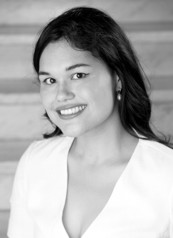 Praised for her "lusciouly dark centred" voice by the Herald Sun, Fleuranne was born in Perth, Australia and completed a Bachelor of Music in Classical Vocal Performance under the tutelage of Megan Sutton at the University of Western Australia. She has since furthered her vocal studies under the tutelage of Gregory Yurisich AM.

In 2018, Fleuranne made her debut with West Australian Opera as Mercedes and covered the title role in their production of Bizet's Carmen. She is the inaugural Annie McFarling Opera Scholarship and Ruskin Scholarship recipient with Melba Opera Trust and is also the inaugural recipient of the Australian International Opera Award to the Royal College of Music.

In 2015, Fleuranne made her debut with the Queensland Symphony Orchestra as Cherubino in scenes from Mozart's Le nozze di Figaro and returning in 2016 as Meg in scenes from Verdi's Falstaff. In 2016, she joined Victorian Opera as one of their Developing Artists and made her debut with them in the role of Madame de la Haltiere in Massenet's Cendrillon. In 2017, Fleuranne joined West Australian Opera as one of their Wesfarmers Arts Young Artists and was a joint recipient of the Bendar Scholarship.

Fleuranne also has a great passion for art song, lieder and oratorio. Appearances include Alto Soloist in Pergolesi's Stabat Mater and Handel's Messiah. In 2017, she was awarded first place in the Australian National Liederfest competition, which saw her fly to Austria to attend the famous Franz Schubert Institute in Vienna.