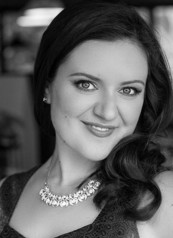 Michelle holds a Bachelor of Music Performance and Graduate Diploma of Opera Studies from the Sydney Conservatorium of Music. There she performed the role of Beth in Little Women by Mark Adamo and was a soloist in Bach’s Christmas Oratorio and Cantatas 140 & 147 with the Early Music Ensemble.

Roles include Despina in Così fan tutte and Clorinda in La Cenerentola with Lyric Opera Studio Weimar in collaboration with Theater Rudolstadt. Michelle performed the role of Zerlina in the Prague Summer Nights Festival in a production of Don Giovanni, directed by Sherrill Milnes and performed in the Estates Theatre, Prague. She was also a young artist in Berlin Opera Academy’s first year running, appearing as Frasquita in their production of Carmen.

Recently Michelle performed Adele with the Brisbane Symphony Orchestra in a staged performance of Die Fledermaus and is a Young Artist this year with Pacific Opera. She has performed regularly with The Song Company and has sung in productions with Pinchgut Opera as a member of Cantillation.

After covering the role of Zerbinetta from Strauss's Ariadne auf Naxos at the Lisa Gasteen National Opera School last December, Michelle has been invited back to sing Anna Reich in Die Lustigen Weiber von Windsor later this year.